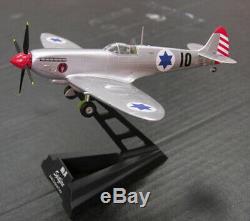 Supermarine Spitfire Mk IX Israeli Defense Force. The German Focke-Wulf FW-190 single-seat fighter appeared suddenly and in large numbers in the skies over Northern France during the summer of 1941. Britain scrambled to create an airplane equal to this powerful, agile, high-altitude adversary. The Mk VIII, a much-refined version of the Mk V, was only in the early stages of production, and it was put on hold.

Instead, as a temporary stopgap measure beginning in 1942, Vickers fitted Spitfire Mk V's with a larger Rolls-Royce Merlin engine, a two-stage supercharger and intercooler, and a four-bladed propeller. This stopgap Spitfire, the Mk IX, actually stayed in production through 1944, and was produced in much larger numbers (5,665) than the Mk VIII (1,658). There were three versions of the Mk IX: the LF (low-altitude) had a clipped wing; the F was the standard fighter version; and the HF (high-altitude) had extended wings and a pressurized cockpit. The item "172 Supermarine Spitfire Mk IX Israeli Defense Force" is in sale since Wednesday, February 12, 2020. This item is in the category "Toys & Hobbies\Diecast & Toy Vehicles\Aircraft & Spacecraft\Contemporary Manufacture".

The seller is "ateamairplanes" and is located in Eads, Tennessee. This item can be shipped worldwide.