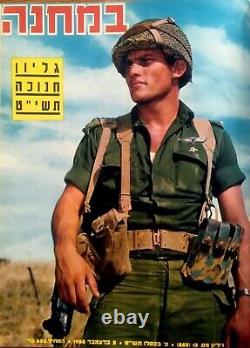 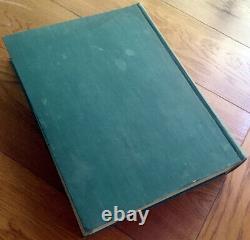 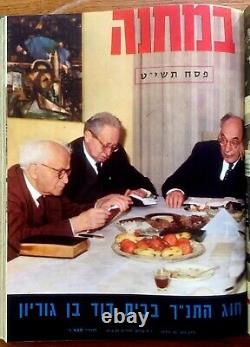 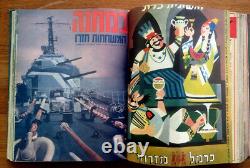 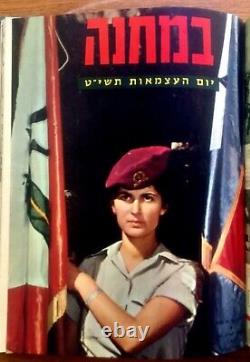 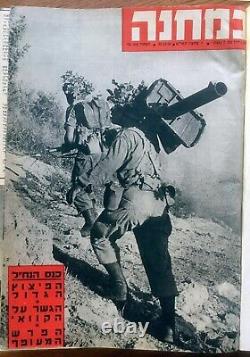 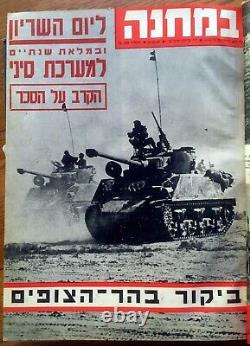 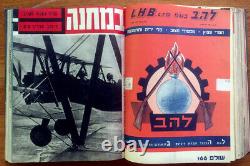 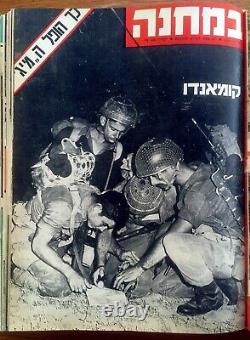 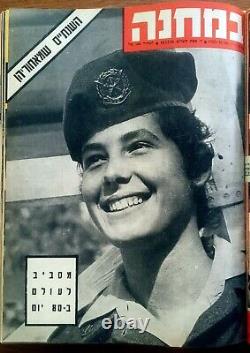 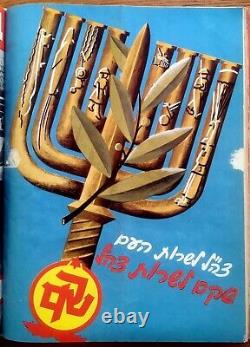 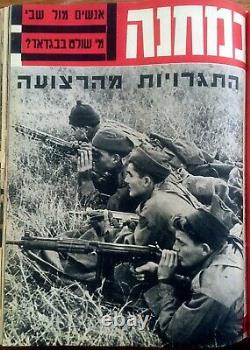 DESCRIPTION : Here for sale is a GREAT FIND. A rare profusion of PHOTOS, ILLUSTRATIONS and REPORTS and ARTICLES, Also PERIOD SONGS and HYMNES - A MIRROR to these thrilling historical days in the life of war beaten newly born JEWISH STATE. Thrilling FRONT COVERS - Ben Gurion, Ben Tzvi etc but mostly IDF SOLDIERS. Great front and back covers, Numerous PHOTOGRAPHED articles and ILLUSTRATIONS. Exquisite PHOTOGRAPHED COVERS of PROPLE, EVENTS and LOCATIONS. IMAGES, ARTICLES and PHOTOS of ERETZ ISRAEL, TEL AVIV, The HOLOCAUST, JEWISH and ISRAELI FEASTS and HOLIDAYS etc. With its over 700 throughout ILLUSTRATED and PHOTOGRAPHED pages - This volume is a RELYABLE MIRROR for that PERIOD - The way almost every Israeli experienced it. The WAR and INDEPENDENCE, ACTUALIA, POLITICS, ART, HUMOUR, LITERATURE, CULTURE, LOCAL AFFAIRS, JUDAISM, TRADITION - All these issues are covered by literaly HUNDREDS of illustrations, Photos and articles.

Size of magazine around 10" x 12". Originaly bound by the publisher. Faded gold heading on spine.

No tears or creases of leaves. Magazines are cut to size by the publisher. (Please watch the scan for a reliable AS IS scan) Will be sent in a special protective rigid sealed packaging. SHIPPMENT : Shipp worldwide via registered surface sea - Weeks duration, No tracking.

Will be sent in a special protective rigid sealed packaging. In the base camp was a Hebrew-language weekly magazine published by the Israel Defense Forces. It was first published in December 1934 by the Haganah and was published as a weekly until December 2016, when it was moved online until it was formally merged into the IDF's website in January 2020.

While Bamahane was subordinate to the IDF's Education and Youth Corps, it is unusually independent, and until 2006, was not censored by the IDF Spokesman. As such, its content was the center of several controversies, to the extent that in May 2001, the head of the Education Corps, Brigadier General Elazar Stern, decided to close the publication, an order which did not come to pass. Contents 1 History 2 Current status 3 Controversies 4 Notable writers 5 References 6 External links History[edit] Bamahane started in December 1934 as an underground publication by the Tel Aviv office of the Haganah. Its chief editor, until 1947, was Ephraim Talmi.

Notable writers, such as Nathan Alterman and Leah Goldberg, wrote for it. At the end of 1947 it became the Haganah's national publication. During that time period, Moshe Shamir became its chief editor. With the founding of the IDF, Bamahane became the soldiers' newspaper.

Between 2000 and 2005, Bamahane consisted of 2 parts: one including news articles related to military and security matters, and the other containing editorials, interviews, photo-ops, etc. From January 2006 until December 2016, it was one publication in the form of a 68-page magazine. Current status[edit] Bamahane's circulation was in the tens of thousands, mainly read by soldiers who receive the magazine in their bases on Thursdays.

Additionally, many Israeli civilians close to the IDF choose to subscribe to the publication. Additionally, Bamahane employed about 20 writers. The editor before Tzachi was Yoni Shanfeld.

Controversies[edit] In May 2001, the commander of the Education Corps at the time, Elazar Stern, ordered the closure of Bamahane, due to'questionable material', including a front-page article about a homosexual colonel. [1] Due to public outrage and an appeal to Defense Minister Binyamin Ben-Eliezer, Bamahane continued to exist. In September 2005, 3 of Bamahane's writers were dismissed for not following a prohibition from the IDF Spokesperson's Unit to document and publish stories and photographs of the relocation of Jewish graves from Gush Katif into Israel proper. [2] As a result of this and other incidents, in January 2006, the head of the Manpower Directorate, now Major General Elazar Stern, ordered each piece in the magazine to undergo careful inspection by the spokesperson's unit.

In the camp, he served as the IDF's official newspaper and is considered israel's oldest weekly. In December 2016, the newspaper was closed and the newspaper first began to be distributed as a "fishy magazine" section of the ACA spokeswoman. [1] Table of Contents 1 History 1.1 Organizational change and digital transfer of the newspaper 2 Camp formation 2.1 Commanders and editors of the main camp for generations 2.1.1 The most prominent newspaper reporters over the years 3 symation lawsuits against the newspaper 4 See also 5 External links 6 Footnotes History & History The newspaper was first published in December 1934 as an underground weekly of the "Gana" branch in Tel Aviv. Until 1947, Ephraim Ptaly was written by Nathan Alterman, Lya Goldberg, Shraga Rubinstein and Gershon Hanoch.

At the end of 1947, he became the national journal of "The Defense", and in February 1948 he began to appear printed (not replicated as it was until then) and Moshe Shamir became his skin. In September of that year, he became IDF Soldiers Newspaper.

The scope of its distribution reached tens of thousands of copies, sent for free to the various IDF units and to subscribers from the military and private sectors, most of whom had some affinity with the IDF reserve personnel, pensioners, IDF soldiers, etc. Between 2000 and 2005, the newspaper consisted of two parts: a news section containing topical information relating to the security system and various IDF units, as well as a magazine, an additive that includes long color articles, interviews, photographs and regular sections. The idea of the split was initiated by the newspaper's editor, Rami Kedar. Since January 2006, the camp has been in one 68-page pamphlet with news pages, articles and sections. Among the authors of the newspaper's regular articles are Gad Smeron, who writes about foreign armies, Maj.

Yair Noh, who writes about Parshat HaShavua, and Dr. Avshalom Kor, who writes about The Hebrew Language. Online issue of The Camp, December 1997 The issue of the independence of the newspaper's content is discussed many times. In May 2001, the chief education officer, Elazar Stern, decided to close the newspaper due to "inappropriate articles", with an emphasis on a front page dedicated to an article about a homosexual god. In the end, the newspaper's publication was shut down for only a week. In 2004, for the first time in the newspaper's history, his commander was appointed to the newspaper's commander, Rani Raviv. In September 2005, three of the newspaper's soldiers were deposed for "excessive motivation" after they attacked the evacuation of a cemetery as part of the disengagement plan, and in January 2006, the head of the A. Announced that the contents of the newspaper would be reviewed by the IDF Spokesperson. At the end of 2007, the IDF Spokesperson, Brig.

In 2007, announced that he was halting the supervision of the newspaper's contents. In February 2012, following an article in the Purim issue that covered the phenomenon of soldiers dressed as drag queens, it was decided to increase the supervision of a newspaper in the camp and that the chief education officer would review the newspaper before it was printed and distributed. From 2008 to 2013, the camp's commander and chief of the camp was Major Yoni Schoenfeld.

In his previous role, Schoenfeld served as the military correspondent for The Idf Waves. Since December 2013, he has served as editor major Tzachi Byrne in his previous role as commander of the IDF Spokesperson's Website. One of the newspaper's most popular reports in the camp was "False Competition", and the regular participants were: Reuven Margalit, Avraham Ben-Ezra, Reuven Greenberg, Jacob Elmos, Eli Eyal, Reuven Favish, Amir Oren, Pnina Sharofsky, Eitan Tzur, Nili Ribek and others. Later, see the book "Give a Smile", in which he collects jokes from the false competition section, edited by Ze'ev Anner and published by the Ministry of Defense - Publishing. Organizational Change and Digital Transfer In 2016, 82 years after the newspaper first published, the IDF's personnel department decided to reduce the volume of printing.

As a result, it was decided to close the weekly and transfer the rights in his name to the personnel department spokeswoman. The weekly's last historically published story was published on December 20 of that year. The first magazine in its current form was first published in January 2017.

Upon completion of the transition, the main change was the beginning of the publication of the newspaper as a "digital" magazine published on the IDF's website and accessible to the public on internet platforms that allow viewing at any time and anywhere. The topics of the first year magazine were determined in advance. For example, in the first month of the magazine, the magazine dealt with warfare, and later on other topics: unique populations, women, technology, permanent servants, recruits and more. The "Camp" section consists of 10 soldiers who perform editing, production, writing and new media roles, on which an officer commander is axed, and the graphics services provided by a civilian designer. At the time of the establishment of the personnel unit, it was decided that the content personnel who would run the newspaper would be veterans of the IDF Spokesperson's speaking course and undergo special training for military journalists at the end of the speakers course.

Out of all the changes, it was decided to termination the lease at Beit Ma'a in Tel Aviv, where the "Camp" system sat for decades. In its internet form, the journal operated in the system room in the Joint Chiefs building at the Base of The Kraya in Tel Aviv. In December 2019, it was decided to close and reunification with the IDF website.

The more senior positions were filled by civilians, IDF employees, who had previously worked in communications systems outside the IDF, and one officer of the rank of captain, who served as deputy commander and editor-in-chief. This item is in the category "Collectibles\Religion & Spirituality\Judaism\Books". The seller is "judaica-bookstore" and is located in this country: IL.