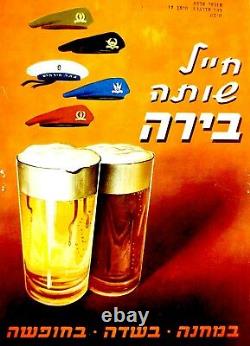 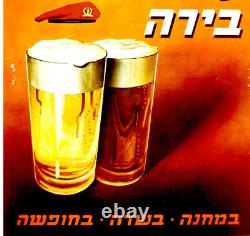 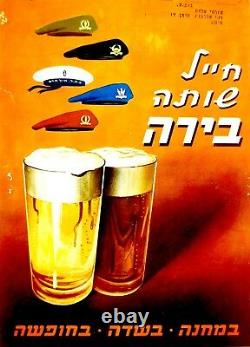 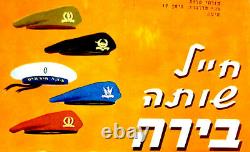 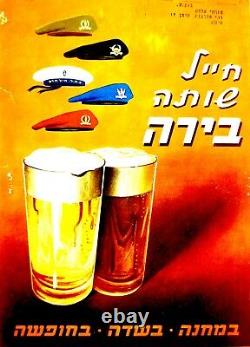 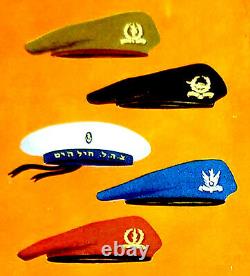 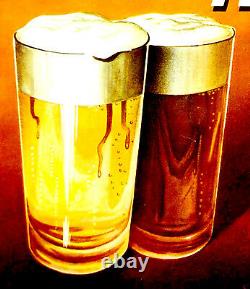 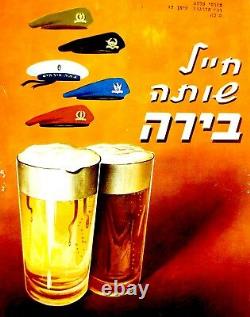 DESCRIPTION : Here for sale is an ORIGINAL illustrated FULL PAGE poster-like large colored ADVERTISEMENT which was attached as a back cove (Printed on the verso) to the 1960 issue of the Hebrew - Israeli - Jewish weekly illustrated mili tary magazine BAMACHANEH (In The MILITARY CAMP). Being a nice FULL PAGE size, Full color illustrated ADVERTISEMENT encouraging the IDF - ZAHAL SOLDIERS of all units to drink BEER. The quite archaic Hebrew text is : " A SOLDIER DRINKS BEER - IN THE CAMP, FIELD and on LEAVE". Two tempting beer glasses with PALE and DARK beer are accompanied by FIVE MILITARY CAPS and EMBLEMS : INFANTRY, NAVY, AIRFORCE, ARMOURED VEHICLES (TANKS) and PARATROOPERS. Unlike MOVIE or COOKING magazines which one tends to keep - The "BAMA CHANEH " magazines, Mainly political, were only seldomly kept or bound and thus are EXTREMELY RARE. The Hebrew written ILLUSTRATED MAGAZINE was published in TEL AVIV - ISRAEL in 1960. A very nice Judauca collectible. Size of ADVERTISEMENT around 9" x 1 2.5 ".

Suitable for framing (Please watch the scan for a reliable AS IS scan) Item will be sent in a special protective rigid sealed packaging. AUTHENTICITY : This poster-like ADVERTISEMENT is fully guaranteed ORIGINAL from 1960 (dated). It holds a life long GUARANTEE for its AUTHENTICITY and ORIGINALITY. Will be sent flat in a special protective packaging.

Beer in Israel is manufactured primarily by two major breweries - Tempo Beer Industries and Israel Beer Breweries. Over the past decade numerous microbreweries have established themselves throughout the country. Beer festivals are held annually in Israel, of which one of the largest is in Jerusalem. History Like the Phoenicians, the Greeks and the Romans, the ancient Israelites were far more drawn to wine than they were to beer. After the exile of the Jews to Babylonia in the sixth century BC, they began embracing beer and several rabbis became established brewers.

[1] Two notable Babylonian Jewish brewers were Rav Chisda and his pupil Rav Papa, both of whom lived in the vicinity of Sura during the fourth century. [2][3] In 1934-35 James Armand de Rothschild, identifying a demand for beer on the part of British nationals residing in Palestine, established the first local commercial brewery in partnership with Gaston Dreyfus, in Rishon LeZion. In 1940 the Palestine Brewery Hebrew:?????? - or, as it was also known, the Nesher Brewery - was commissioned by the AACI to supply beer to Australian troops stationed in Palestine. By 1942 the brewery was compelled to enlarge its plant in order to meet increased demand being generated on the part of both military and civilian consumers.

[1][4][5][6][7] Construction of what was at the time the largest brewery in the Middle East, the National Brewery, began in April 1952 in the city of Netanya, founded by a group of investors led by Louis Herzberg. Upon completion in May 1953, the National Brewery had an annual production capacity of 400,000 barrels. [8][9] The National Brewery merged with the Palestine Brewery and the Galilee Brewery in 1973, whereby it came to control 90% of Israel's beer market. Beer, it proved more successful than Heineken and Tuborg and was consumed at premier bars in Cairo and other locations in Egypt, even as conservative religious Muslim leaders campaigned to ban the sale of alcoholic drinks in the country.

[10][11] After entering into a license agreement with Anheuser-Busch International in 1983 for production of the first American beer in Israel, the National Brewery began producing Budweiser in 1984. [1][contradiction] Breweries Since the 1950s, the Israeli beer industry has been dominated by no more than two companies at a time. Beginning in the 1990s with the establishment of Israel Beer Breweries, it and Tempo Beer Industries control 70% of Israel's beer market. Tempo produces the Goldstar and Maccabee labels, while Israel Beer produces Carlsberg and Tuborg.

[15][16] In addition, around two dozen licensed commercial microbreweries operate in the country. [17] Netanya-based Tempo is the largest brewery in Israel. In 1999 Tempo's Goldstar and Maccabee beers accounted for 60% of all beer sales in the country. Tempo also imports Heineken and Amstel.

[18] Israel Beer Breweries entered the market in 1991-92 as a partnership between Carlsberg Group and the local Coca-Cola company. In 1996 it began distributing Guinness.

The Dancing Camel Brewery, which opened in Tel Aviv in 2006, was the first microbrewery to open in Israel. Later that year the Golan Brewery opened up in the Golan Heights region of Israel. Jem's Beer Factory, Israel's first kosher microbrewery, opened in Petah Tiqwa in 2009.

[25] 2010 was an especially active year for new microbreweries. [26] Beers A bottle of Goldstar Dark Lager, an Israeli beer The first native beer label to emerge in what would soon become the State of Israel was Nesher, in the 1930s. In its early years it was the leading beer label locally and was produced in quantities of 10,000 liters per year. Two varieties of Nesher were available at that time - a pilsner lager and a malt beer. [8][19] Nesher Malt continues to be known in Hebrew as bira shechora ("black beer").

[1] Goldstar, a pale lager brewed in Israel since 1950, was originally produced at the Cabeer Brewery in Rishon LeZion. In the years between 1952 and the mid-1980s a popular beer brewed in Israel was Abir. Maccabee, a pilsner invented by brewmaster Menachem Berliner, was introduced in 1968 and competed with Goldstar for market share until the 1970s.

[1][8][27][28] Goldstar won a Monde Selection gold medal in 2007, and in 2011 it won an Israeli Product of the Year award. [29] The brews produced by the Dancing Camel microbrewery are adapted to accommodate Israel's palate which, according to founder David Cohen, eschews bitter flavors. Thus the Dancing Camel IPA offsets the bitterness of its hops with silan, a syrup extracted from dates.

Dancing Camel also produces seasonal beers inspired by the Jewish holidays: for Rosh Hashanah Dancing Camel releases a pomegranate beer, and for Sukkoth a wheat beer made with etrog. [30] Culture Bars The first Irish pub in Israel was Molly Bloom's, which opened in central Tel Aviv in 2000 as a partnership between Israel Beer Breweries and an Irish entrepreneur. By 2004 there were Irish pubs in Tel Aviv, Herzliya, Rehovoth, and Glilot. [31] Porter and Sons in Tel Aviv, which opened in 2010, has the most beers on tap of any establishment in Israel - 50 as of 2012. [19][32][33] In June 2012 a new Bar was opened next to Shuk HaCarmel called Beer Bazaar.

They serve over 80 Israeli Beers, more than 10 Israeli ciders and also have their own beer on tap. Festivals The Jerusalem Beer Festival is one of the largest beer festivals in Israel, held annually in the summer since 2004. [34][35] Other festivals are held in Tel Aviv, Haifa and the Mateh Yehuda region.

[36][37][38] A wine and beer festival is held annually in Beer Sheva. [39] The city of Ashdod held its first beer festival in 2011. [40] Israeli Beer Club In 2002 the Israeli Beer Club was established in order to promote the culture of beer in Israel and specifically to serve as a platform for helping small-scale brewers and importers to get their products onto the market. The club offers homebrewing and beer tasting workshops and is involved in organizing beer competitions.

[41] Economy In 1937, in an effort to protect the local brewing industry from competition issuing from neighboring breweries in Syria and Lebanon, the British High Commissioner for Palestine ordered a tariff of 10 mils on each liter of imported beer. Between 1992 and 1997 the share of international labels in the market grew from 9% to 36%, with a concomitant decline in the share of domestic labels over the same period from 91% to 64%. [43] The value of Israel's beer market was estimated at? 1.2 billion in 2009. [23] Its size in 2010 was estimated at 950,000-1,000,000 hectoliters, up from 800,000 in 2005. [44] With a strong local economy the alcoholic drinks market in general is growing within Israel, with particular growth in beer sales.

[45] The leading beer companies, such as Tempo Beer Industries and Israel Beer Breweries, launched new beer brands in 2007, with the most significant introductions being Goldstar Light, Tuborg T and Samuel Adams. [46] Goldstar and Maccabee are the overall leading brands in Israel. [46] Over 75% of beer sales in Israel are from off-sales locations such as supermarkets, rather than bars. [47] The move was opposed by Eli Yishai of the Shas party, who said it would have fatal repercussions vis-a-vis Israel's local boutique breweries.

This item is in the category "Collectibles\Religion & Spirituality\Judaism\Images". The seller is "judaica-bookstore" and is located in this country: IL. This item can be shipped worldwide.