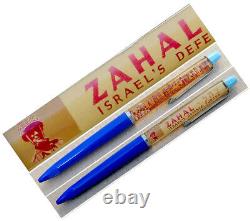 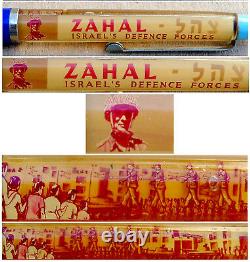 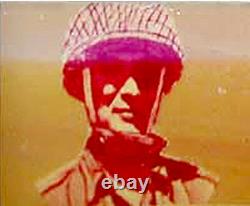 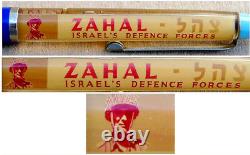 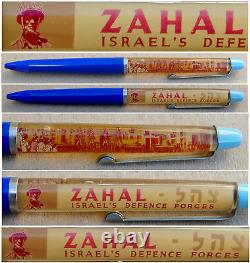 In the late 1960's, As a part of the ISRAELI -JEWISH -HEBREW growing SOUVENIR industry which followed the great victory in the 1967 SIX DAYS WAR, There was a short try to manufacture ORIGINAL Israeli Judaica FLOATY (Float) PEN, Presenting typical VIEWS and IMAGES of Eretz Israel. Not many such floaty pens were manufactured and much less survived. Here for sale is a VERY RARE and exciting sample of such floaty pen, Dedicated to the Israeli Army, Military related ISRAEL DEFENCE FORCES namely ZAHAL or IDF.

Depicting the traditional IDF PARADE of the ISRAEL DAY OF INDEPENDENCE in the streets of Tel Aviv (Allenby Street). Several IDF - ZAHAL infantry platoons are marching in the PARADE together with several Israeli TANKS. In addition, The pen also carries the image of ISRAEL legendary CHIEF OF STAFF, Leutenent General MOSHE DAYAN wearing his combat helmet. The headings are in Hebrew and in English. The pen, MADE IN ISRAEL, somewhat resembles the ESKESEN floart pens of that period.

Object on the background of the ARMY PARADE in the TEL AVIV STREET is a group of marching soldiers. The movement isn't fluent. (Pls look at scan for accurate AS IS images). Will be sent inside a protective RIGID packaging. AUTHENTICITY : The floaty pen is fully guaranteed ORIGINAL from ca 1960's , It is NOT a reproduction or a recently made pen or an immitation , It holds a life long GUARANTEE for its AUTHENTICITY and ORIGINALITY.

20 May 1915 - 16 October 1981 was an Israeli military leader and politician. He was the second child born on the first kibbutz. As the fourth Chief of Staff of the Israel Defense Forces (1953-58), he became a fighting symbol to the world of the new state of Israel.

He went on to become Defense Minister and later Foreign Minister of Israel. Born in 1915 to Shmuel Dayan (member of the first Knesset) in Degania near the Sea of Galilee. In 1935, he joined the Haganah in his teens, and in 1941 he lost an eye in an Allied operation against the forces of the French Vichy Government in Lebanon. During the 1948 war, his battalion captured Ramla and Lydda, and he later became the governor of Jerusalem.

He held several positions in the Israel Defense Force as a chief of staff and a minister of defense during the 1967 war. When Ben-Gurion was the Prime Minister of the Jewish state of ISRAEL, he was regularly consulted on defense issues. Besides his military career, he also was a farmer, a secret poet, an amateur archaeologist, a politician, and a statesman, who usually spoke briefly and to the point. In 1948 was appointed Commander of the Jerusalem District and in this capacity he conducted negotiations with King Abdullah of Jordan and his representatives.

After a year he as appointed to be Chief of Staff and served in this capacity during the Sinai Campaign in 1956. He resigned from the IDF in 1958. A floaty pen is treasured by many people around the world- Thousands of colelctors have collected the floaty pen since they were children and a trading and swapping pens on e-bay, special collector's websites or at trade shows around the world. The popularity of the Floaty pen is immense and growing.

Most people know the pen from their childhood, having played with the "lady" version in which a lady undresses. The Original Floating Action Pen is the only true Floaty pen. Float Pens aka Floaty Pens. Floaty Pens is a writing instrument that has something floating inside a clear window. Eskesen, the world's largest producer of float pens, calls them Floating Action Pens.

During their 60+ year history well over half a billion pens have been produced, 90% of the world's supply. Floaty pens consist of two main components: 1 A lower half made of opaque plastic usually containing a retractable ball-point tip. 2 An upper half called the design barrel, it's a transparent plastic oil-filled tube that contains a stationary background scene with a moving component on a glider in front.

When the pen is titled horizontally to one side or another the glider figure moves across the background scene. "Day of Independence" is the national day ofIsrael, commemorating the Israeli Declaration of Independence in 1948. It is celebrated either on the 5th of Iyar, according to the Hebrew calendar, or on one of the preceding or following days, depending on which day of the week this date falls on.

Yom Hazikaron, the Israeli Fallen Soldiers and Victims of Terrorism Remembrance Day is followed by Independence Day. The mood outside of Ben-Gurion's home just prior to the declaration was joyous: The Jews of Palestine...

Were dancing because they were about to realize what was one of the most remarkable and inspiring achievements in human history: A people which had been exiled from its homeland two thousand years before, which had endured countless pogroms, expulsions, and persecutions, but which had refused to relinquish its identity-which had, on the contrary, substantially strengthened that identity; a people which only a few years before had been the victim of mankind's largest single act of mass murder, killing a third of the world's Jews, that people was returning home as sovereign citizens in their own independent state. [1] Independence was declared eight hours before the end of the British Mandate of Palestine, which was due to finish on 15 May 1948. Declaration of the State of Israel The operative paragraph of the Declaration of the Establishment of State of Israel of 14 May 1948[2] expresses the declaration to be by virtue of our natural and historic right and on the strength of the resolution of the United Nations General Assembly. The operative paragraph concludes with the words of Ben-Gurion, where he thereby declares the establishment of a Jewish state in Eretz Israel, to be known as the State of Israel. The new state was quickly recognised by the United States de facto, the Soviet Union, [3] and many other countries, but not by the surrounding Arab states, which marched with their troops into the area of the former British Mandate.

The ceremony includes a speech by the speaker of the Knesset (the Israeli Parliament), artistic performances, a Flag of Israel, forming elaborate structures (such as a Menorah, Magen David) and the ceremonial lighting of twelve torches, one for each of theTribes of Israel. Every year a dozen Israeli citizens, who made a significant social contribution in a selected area, are invited to light the torches. Many cities hold outdoor performances in cities' squares featuring leading Israeli singers and fireworksdisplays. Streets around the squares are closed to cars, allowing people to sing and dance in the streets. Independence Day[edit] International Bible Contest, 1985 Visitors around an IDF Caterpillar D9 at the Israel Defense Forcesexhibition at Yad La-Shiryon, Independence Day 2012. Reception of the President of Israel for honouring excellence in 120 IDF soldiers. The event takes place in the President's official residence in Jerusalem. International Bible Contest in Jerusalem Israel Prize ceremony in Jerusalem Israel Defense Forces opens some of its bases to the public. Balconies are decorated with Israeli flags, and small flags are attached to car windows.

Some leave the flags hoisted until after Yom Yerushalayim. Israeli Television channels air the official events live, and classic cult Israeli movies and skits are shown.

Their decision that it be recited (without a blessing) gave rise to a bitter public dispute, with Agudath Israel rejecting the notion of imbuing the day with any religious significance whatsoever, and religious Zionists believing the blessing should be obligatory. [4] The Rabbinate also ruled that they were unable to sanction instrumental music and dances on this day which occurs during the sephirah period. [5] The recitation of the blessing over Hallel was introduced in 1973 by Israeli Chief Rabbi Shlomo Goren. The innovation was strongly denounced by his Sephardic counterpart, Rabbi Ovadia Yosef[6] and by Rabbi Joseph B. Soloveitchik, leader ofModern Orthodox Judaism in America.

[7] The Religious Zionist movement created a liturgy for the holiday which sometimes includes the recitation of some psalms and the reading of the haftarah of Isaiah 10:32-12:6, which is also read on the last day of Pesach in the Diaspora, on the holiday morning. Other changes to the daily prayers include reciting Hallel, saying the expanded Pesukei D'Zimrah of Shabbat (the same practice that is observed almost universally on Hoshanah Rabbah), and/or blowing the Shofar. Rabbi Joseph Soloveitchik questioned the Halachic imperative in canonising these changes[8] (it is not clear what his personal practice was regarding the recital of Hallel). In any case, the majority of his students recite Hallel without the blessings.

[9] A number of authorities have promoted the inclusion of a version of Al Hanisim for the miracles... [10] Most Haredim make no changes in their daily prayers. People affiliated to the Edah HaChareidis mourn the establishment of Israel on Independence Day, claiming that the establishment of a Jewish state before the coming of the Messiah is a sin and heresy. Some even fast on this day and recite prayers for fast days. [11] The Conservative Movement read the Torah portion of Deuteronomy 7:12-8:18, and include a version of Al Hanisim.

[12]The Reform Movement suggests the inclusion of Ya'aleh V'yavo in the Amidah prayer. Timing[edit] Independence Day is celebrated on the 5th day of Iyar? In the Hebrew calendar, the anniversary of the day on which Israeli independence was proclaimed, when David Ben-Gurion publicly read the Israeli Declaration of Independence. The corresponding Gregorian date was 14 May 1948.

If the 5th of Iyar falls on a Friday or Saturday, the celebrations are moved up to the preceding Thursday. This rule has been effective since 1951. If the 5th of Iyar is on a Monday, the festival is postponed to Tuesday. This rule has been effective since 2004, in order to avoid potential violation of Sabbath laws by preparing for Yom Hazikaron or Independence Day on a Shabbat.

The seller is "judaica-bookstore" and is located in this country: IL. This item can be shipped worldwide.