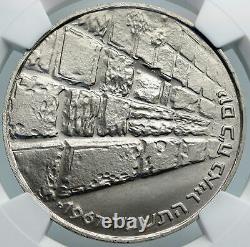 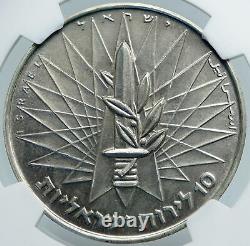 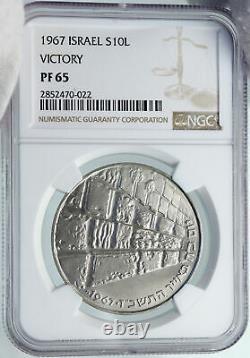 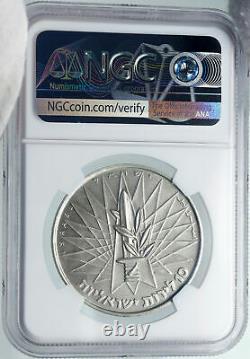 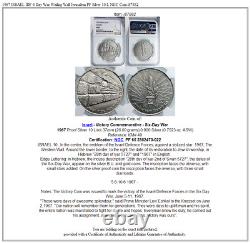 Item: i87882 Authentic Coin of. Victory Commemorative - Six-Day War 1967 Proof Silver 10 Lirot 37mm (26.00 grams) 0.900 Silver 0.7523 oz. ASW Reference: KM# 49 Certification: NGC. In the center, the emblem of the Israel Defence Forces, against a stylized star. Around the lower border, to the right, the date of its restoration to Jewish worship, in Hebrew "28th day of lyar 5727" and "1967" in English. Edge Lettering: In Hebrew, the incuse description "28th day of lyar-2nd of Sivan 5727", the dates of the Six-Day War, appear on the silver B. The inscription faces the obverse, with small stars added. On the silver proof coin the inscription faces the reverse, with three small diamonds...

Notes: The Victory Coin was issued to mark the victory of the Israel Defence Forces in the Six Day War, June 5-11, 1967. "Those were days of awesome splendour, " said Prime Minister Levi Eshkol to the Knesset on June 2,1967. Our nation will remember them for generations. They were days to uplift man and his spirit, the entire nation was marshaled to fight for its life and hopes. Everyman knew his duty; he carried out his assignment; attended to his post.

Milhemet Sheshet Ha Yamim ; Arabic:?????? Arb 1967, "War of 1967", also known as the June War, 1967 Arab-Israeli War, or Third Arab-Israeli War, was fought between 5 and 10 June 1967 by Israel and the neighboring states of Egypt (known at the time as the United Arab Republic), Jordan, and Syria. Relations between Israel and its neighbours were not fully normalised after the 1948 Arab-Israeli War.

Israel was eventually forced to withdraw, but was guaranteed that the Straits of Tiran would remain open. A United Nations Emergency Force was deployed along the border, but there was no demilitarisation agreement. In the months prior to June 1967, tensions became dangerously heightened. In May Egyptian President Gamal Abdel Nasser announced that the straits would be closed to Israeli vessels and then mobilised its Egyptian forces along its border with Israel.

After some initial resistance, Nasser ordered the evacuation of the Sinai. Israeli forces rushed westward in pursuit of the Egyptians, inflicted heavy losses, and conquered the Sinai. Jordan had entered into a defense pact with Egypt a week before the war began; the agreement envisaged that in the event of war Jordan would not take an offensive role but would attempt to tie down Israeli forces to prevent them making territorial gains. About an hour after the Israeli air attack, the Egyptian commander of the Jordanian army was ordered by Cairo to begin attacks on Israel; in the initially confused situation, the Jordanians were told that Egypt had repelled the Israeli air strikes. Israel subsequently captured and occupied the West Bank, including East Jerusalem, from the Jordanians and the Golan Heights from Syria.

Egypt and Jordan agreed to a ceasefire on 8 June, and Syria agreed on 9 June; a ceasefire was signed with Israel on 11 June. In the aftermath of the war, Israel had crippled the Egyptian, Syrian and Jordanian militaries, having killed over 20,000 troops while only losing fewer than 1,000 of its own. The Israeli success was the result of a well-prepared and enacted strategy, the poor leadership of the Arab states, and their poor military leadership and strategy. Israel seized the Gaza Strip and the Sinai Peninsula from Egypt, the West Bank, including East Jerusalem, from Jordan and the Golan Heights from Syria.

Israel's international standing greatly improved in the following years. Its victory humiliated Egypt, Jordan and Syria, leading Nasser to resign in shame; he was later reinstated after protests in Egypt against his resignation. The speed and ease of Israel's victory would later lead to a dangerous overconfidence within the ranks of the Israel Defense Forces (IDF), contributing to initial Arab successes in the subsequent 1973 Yom Kippur War, although ultimately Israeli forces were successful and defeated the Arab militaries. The displacement of civilian populations resulting from the war would have long-term consequences, as 300,000 Palestinians fled the West Bank and about 100,000 Syrians left the Golan Heights. Across the Arab world, Jewish minority communities fled or were expelled, with refugees going mainly to Israel or Europe.

, officially the State of Israel, is a country in the Middle East, on the southeastern shore of the Mediterranean Sea and the northern shore of the Red Sea. It has land borders with Lebanon to the north, Syria to the northeast, Jordan on the east, the Palestinian territories of the West Bank and Gaza Strip to the east and west, respectively, and Egypt to the southwest. The country contains geographically diverse features within its relatively small area. Israel's economic and technological center is Tel Aviv, while its seat of government and proclaimed capital is Jerusalem, although the state's sovereignty over Jerusalem has only partial recognition. Israel has evidence of the earliest migration of hominids out of Africa. Canaanite tribes are archaeologically attested since the Middle Bronze Age, while the Kingdoms of Israel and Judah emerged during the Iron Age. The Neo-Assyrian Empire destroyed Israel around 720 BCE. Judah was later conquered by the Babylonian, Persian and Hellenistic empires and had existed as Jewish autonomous provinces. The successful Maccabean Revolt led to an independent Hasmonean kingdom by 110 BCE, which in 63 BCE however became a client state of the Roman Republic that subsequently installed the Herodian dynasty in 37 BCE, and in 6 CE created the Roman province of Judea. Judea lasted as a Roman province until the failed Jewish revolts resulted in widespread destruction, expulsion of Jewish population and the renaming of the region from Iudaea to Syria Palaestina. Jewish presence in the region has persisted to a certain extent over the centuries. In the 7th century the Levant was taken from the Byzantine Empire by the Arabs and remained in Muslim control until the First Crusade of 1099, followed by the Ayyubid conquest of 1187. The Mamluk Sultanate of Egypt extended its control over the Levant in the 13th century until its defeat by the Ottoman Empire in 1517. During the 19th century, national awakening among Jews led to the establishment of the Zionist movement in the diaspora followed by waves of immigration to Ottoman and later British Palestine. In 1947, the United Nations adopted a Partition Plan for Palestine recommending the creation of independent Arab and Jewish states and an internationalized Jerusalem. The plan was accepted by the Jewish Agency, and rejected by Arab leaders.

The following year, the Jewish Agency declared the independence of the State of Israel, and the subsequent 1948 Arab-Israeli War saw Israel's establishment over most of the former Mandate territory, while the West Bank and Gaza were held by neighboring Arab states. Israel has since fought several wars with Arab countries, and it has since 1967 occupied territories including the West Bank, Golan Heights and the Gaza Strip (still considered occupied after 2005 disengagement, although some legal experts dispute this claim). It extended its laws to the Golan Heights and East Jerusalem, but not the West Bank.

Israel's occupation of the Palestinian territories is the world's longest military occupation in modern times. Efforts to resolve the Israeli-Palestinian conflict have not resulted in a final peace agreement.

However, peace treaties between Israel and both Egypt and Jordan have been signed. In its Basic Laws, Israel defines itself as a Jewish and democratic state. Israel is a representative democracy with a parliamentary system, proportional representation and universal suffrage.

The prime minister is head of government and the Knesset is the legislature. Israel is a developed country and an OECD member, with the 32nd-largest economy in the world by nominal gross domestic product as of 2017. The country benefits from a highly skilled workforce and is among the most educated countries in the world with one of the highest percentages of its citizens holding a tertiary education degree. Israel has the highest standard of living in the Middle East, and has one of the highest life expectancies in the world.

World-renowned expert numismatist, enthusiast, author and dealer in authentic ancient Greek, ancient Roman, ancient Byzantine, world coins & more. Ilya Zlobin is an independent individual who has a passion for coin collecting, research and understanding the importance of the historical context and significance all coins and objects represent. Send me a message about this and I can update your invoice should you want this method. Getting your order to you, quickly and securely is a top priority and is taken seriously here.

When should I leave feedback? Please don't leave any negative feedbacks, as it happens sometimes that people rush to leave feedback before letting sufficient time for their order to arrive. The matter of fact is that any issues can be resolved, as reputation is most important to me. My goal is to provide superior products and quality of service.

How and where do I learn more about collecting ancient coins? Visit the Guide on How to Use My Store. For on an overview about using my store, with additional information and links to all other parts of my store which may include educational information on topics you are looking for. This item is in the category "Coins & Paper Money\Coins: World\Middle East\Israel". The seller is "highrating_lowprice" and is located in this country: US. This item can be shipped worldwide.