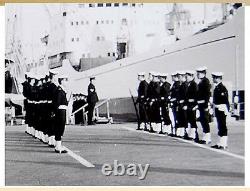 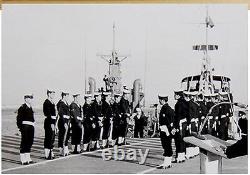 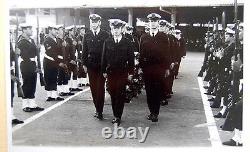 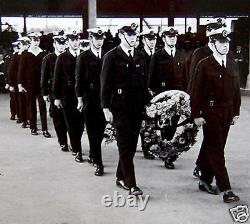 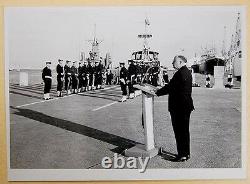 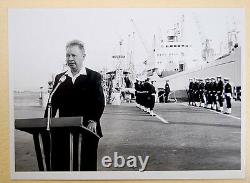 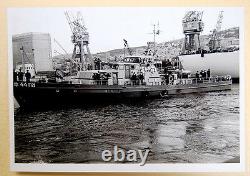 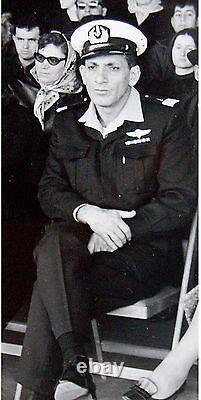 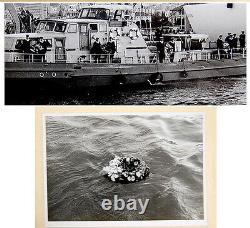 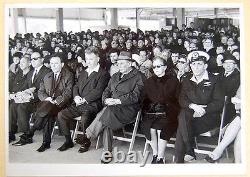 Here for sale are 15 original vintage candid real PHOTOGRAPHS, Depicting the BURIAL - FUNERAL ceremony for the "EILAT" battleship which took place a short time later at the military port of HAIFA. A few Israeli goverment ministers, The chief commander of the Israeli IDF NAVY Shlomo Er'el and the mourning famillies participated in the ceremony. An honor guard of IDF NAVY naval officers which eventualy threw the ceremonial burial garland to the sea from an ancored IDF BATTLESHIP. The photographer "Photo Fux " from Haifa (His stamp is on verso of each photo), Has manualy prepared ALBUMS which contained the mounted photos for distribution among the participants. For sale is one of these albums.

A Thrilling Jewish - Judaica - Israel - Hebrew - Zionist find. Out of the originaly mounted 18 photos 15 photos are present. The mounted photos can be easily separated from the album if one wishes to do so.

Album size : 8 x 9. AUTHENTICITY : These are vintage ORIGINAL 1967 Candid real photos , NOT reproductions or a reprints , they hold a life long GUARANTEE for their AUTHENTICITY and ORIGINALITY. The battleship, commanded by Yitzhak Shoshan, was sailing near the port of Sinai.

The battleship was paralyzed and the communication system stopped functioning, except for reserve equipment, with which the battleship called out for help. For two hours the Eilat was stranded on its side. At 19:44 a third rocket was fired and struck the stern of the Eilat.

The ammunition inside the battleship began to explode, and the Eilat flipped over and began to sink. The crew members jumped into the water and brought down the wounded in three rafts.

A few minutes later the fourth rocket exploded in the water, and many were injured from the thrust of the waves. Air Force planes lit the site, and helicopters began rescuing the wounded.

HMS Zealous was a Z-class destroyer of the Royal Navy built in 1944 by Cammell Laird. She served during the Second World War, participating in operations in the North Sea and off the Norwegian coast, before taking part in some of the Arctic convoys. She was sunk several months after the conflict by missiles launched from two small Egyptian missile boats; this made her the first vessel to be sunk by a missile boat in wartime.

It was an important milestone in naval surface warfare, which aroused considerable interest around the world in the development of small manoeuvrable missile boats. Contents [hide] 1 Second World War 2 Service as Eilat 2.1 Sinking 2.2 Aftermath of the sinking 3 Notes 4 References 5 External links Second World War[edit] Zealous was one of four British destroyers of the Home Fleet that rescued 525 Norwegians, who had been hiding from German patrols in caves on the snow-covered mountains of Sørøya island, Norway for three months. The rescue involved the destroyers on a daring race 60 miles (97 km) behind enemy lines. The Norwegians were safely evacuated to the British port of Gourock. Zealous made two trips from the UK to Russia as part of the Arctic Convoys taking supplies around Norway to Kola.

Under the guidance of Commander R. Jessel RN DSO she ran the gauntlet of German U-Boats and aircraft. On 5 April 1945 she was involved in an attack on a convoy entering the Jøssingfjord on the coast of Norway.

There she was mistaken by excited German soldiers as a German destroyer sent to evacuate them. [citation needed] Service as Eilat[edit] INS Eilat From October 1945 until August 1946 Zealous served in the 4th Destroyer Flotilla as part of the Home Fleet.

Between 1953 and 1954 she was held in reserve at Penarth. On the morning of 31 October, in the midst of the Suez Crisis, the Egyptian destroyer Ibrahim el Awal (an ex-British Hunt class destroyer) shelled Haifa harbor.

A counter-attack by the French destroyer Kersaint and by the Israeli Yaffo and Eilat forced the Egyptian destroyer to steam back towards Port Said. It was then also attacked by a pair of IDF/AF Ouragans and a Dakota. [3] On a patrol during the night of 11-12 July 1967, Eilat and two Israeli torpedo-boats came across two Egyptian torpedo-boats off the Rumani coast.

They immediately engaged the vessels and sank both. [4] Sinking[edit] Eilat was sunk on 21 October 1967 in Mediterranean international waters off Port Said in the Sinai, hit by three Soviet-made Styx missiles launched by Egyptian missile boats. [5] An Egyptian Komar-class missile boat positioned within the harbour at Port Said fired two missiles at the Israeli destroyer. Eilat's radar did not reveal any suspicious activity or movements because the Egyptians launched the missiles from within the port.

Out of a crew of 199, 47 were killed and more than a hundred were wounded. [7] Aftermath of the sinking[edit] The sinking just months after its defeat in the Six Day War caused brief jubilation in the Arab World and crowds gathered to cheer the two missile boats upon their return to Port Said.

[8] In Israel, angry crowds surrounded Chief of Staff Yitzhak Rabin and newspaper editorials demanded vengeance. [citation needed] Sixty-seven hours after the attack Israel retaliated by shelling Port Suez with heavy mortars. Two of the site's three oil refineries were destroyed with the smallest one left standing. The refineries produced all of Egypt's cooking and heating gas, and 80% of its oil.

Other areas of the city were hit. Israel ignored or pleaded "technical difficulties" to UN requests for a ceasefire. The Soviet Union sent seven warships on a "courtesy call" to Egyptian ports to dissuade Israel from further attacks. [8] Torpedo tubes from INS Eilat Monument to the Fallen of INS Eilat, Haifa.

Sculptor: Igael Tumarkin (Credit: Dr Avishai Teicher) The sinking of Eilat by surface-to-surface missiles inaugurated a new era in the development of naval weapons and the formulation of naval strategy throughout the world. [citation needed] Though not highly publicized at the time, the sinking had a considerable impact on the Israeli Navy. [9] The resulting focus on new, more agile, missile-armed boats would reap major benefits for the Israeli navy some six years later during the Yom Kippur War. [10] A set of torpedo tubes removed from Eilat before her sinking are preserved at the Clandestine Immigration and Naval Museum, Haifa, and a Monument to the Fallen of INS Eilat was established just outside the Museum, the work of sculptor Igael Tumarkin.

Eilat Destroyer The Israeli-converted vintage World War II British Destroyer was formerly known by the British as HMS Zealous. HMS Zodiac also served with the Israeli Navy and was of the same class - she was then renamed K42 Jaffa [there was no K41].

95 - Renamed EL FATEH. If the Israeli Navy had been debating whether to upgrade her fleet or not, the events of 21 October 1967 definitely influenced her thinking.

On that day, as the Eilat was 14 miles off of Egypt's Port Said, two Russian-built Egyptian missile boats lay in wait armed with Styx missiles. The Egyptians had been tracking the Eilat all day with Russian advisers aboard. Somehow, of the 190 sailors aboard the Eilat, 152 survived.

Of them, 41 were wounded. Forty-seven Israeli sailors were killed. The sinking of the Eilat was not highly publicized at the time, for reasons of prestige, but its impact was enormous.

It galvanized the Israeli Navy into seeking out more and better naval craft, more suited to the modern conditions of missile combat. The day of the great warship - for the Israelis at least (but not for the Great Powers) - was over. Type Destroyer Displacement 1710 BRT Length 363 feet Complement 186 men Armament As designed; 4 4.5" guns (4x1) 2 40mm AA (1x2) 6 20mm AA (2x2, 2x1) 8 21" torpedo tubes Max speed 37 knots Engines Geared turbines, 2 shafts Power 40000 HP. This item is in the category "Collectibles\Religion & Spirituality\Judaism\Images". The seller is "judaica-bookstore" and is located in this country: IL.