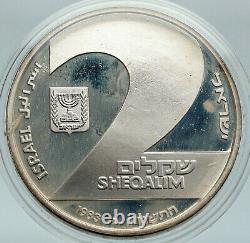 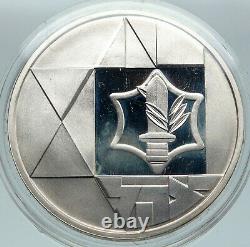 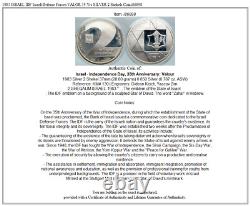 The emblem of the State of Israel. The IDF emblem on a background of a sculpted Star of David. The word "Zahal" in Hebrew.

Coin Notes: On the 35th Anniversary of the War of Independence, during which the establishment of the State of Israel was proclaimed, the Bank of Israel issued a commemorative coin dedicated to the Israel Defense Forces. The IDF is the army of the Israeli nation and guarantees the country's existence, its territorial integrity and its sovereignty.

The IDF was established two weeks after the Proclamation of Independence of the State of Israel. Its activities include: - The guaranteeing of the existence of the tate by taking deterrent action when Israel's sovereignty or its itizens are threatened by enemy aggression. It defends the Stake of Israel against enemy armies in war. Since 1948, the IDF has fought the War of Independence, the Sinai Campaign, the Six-Day War, the War of Attrition, the Yom Kippur War and the "Peace for Galilee" War. The execution of security by allowing the country's citizens to carry on a productive and creative existence. The assistance in settlement, immigration and absorption, immigrant integration, promotion of national awareness and education, as well as the provision of professional training for youths from underprivileged backgrounds. The IDF is a pioneer in the field of voluntary work in Israel.

, commonly known in Israel by the Hebrew acronym Tzahal????? , are the military forces of the State of Israel. They consist of the ground forces, air force, and navy. It is the sole military wing of the Israeli security forces, and has no civilian jurisdiction within Israel.

The IDF is headed by its Chief of General Staff, the Ramatkal, subordinate to the Defense Minister of Israel; Lieutenant General (Rav Aluf) Aviv Kochavi has served as Chief of Staff since January 15, 2019. An order from Defense Minister David Ben-Gurion on 26 May 1948 officially set up the Israel Defense Forces as a conscript army formed out of the paramilitary group Haganah, incorporating the militant groups Irgun and Lehi. Org, the number of wars and border conflicts in which the IDF has been involved in its short history makes it one of the most battle-trained armed forces in the world. While originally the IDF operated on three fronts-against Lebanon and Syria in the north, Jordan and Iraq in the east, and Egypt in the south-after the 1979 Egyptian-Israeli Peace Treaty, it has concentrated its activities in southern Lebanon and the Palestinian Territories, including the First and the Second Intifada.

The IDF uses several technologies developed in Israel, many of them made specifically to match the IDF's needs, such as the Merkava main battle tank, Achzarit armoured personnel carrier, high tech weapons systems, the Iron Dome missile defense system, Trophy active protection system for vehicles, and the Galil and Tavor assault rifles. The Uzi submachine gun was invented in Israel and used by the IDF until December 2003, ending a service that began in 1954. Since 1967, the IDF has had close military relations with the United States, including development cooperation, such as on the F-15I jet, THEL laser defense system, and the Arrow missile defense system. Israel, is a sovereign state in Western Asia. The country is situated in the Middle East at the southeastern shore of the Mediterranean Sea and the northern shore of the Gulf of Aqaba in the Red Sea.

It shares land borders with Lebanon to the north, Syria in the northeast, Jordan on the east, the Palestinian territories (which are claimed by the State of Palestine and are partially controlled by Israel) comprising the West Bank and Gaza Strip to the east and west, respectively, and Egypt to the southwest. It contains geographically diverse features within its relatively small area.

Israel's financial and technology center is Tel Aviv while Jerusalem is both the self-designated capital and most populous individual city under the country's governmental administration. Israeli sovereignty over Jerusalem is internationally unrecognized. On 29 November 1947, the United Nations General Assembly recommended the adoption and implementation of the Partition Plan for Mandatory Palestine. This UN plan specified borders for new Arab and Jewish states and also specified an area of Jerusalem and its environs which was to be administered by the UN under an international regime.

The end of the British Mandate for Palestine was set for midnight on 14 May 1948. That day, David Ben-Gurion , the executive head of the Zionist Organization and president of the Jewish Agency for Palestine , declared "the establishment of a Jewish state in Eretz Israel , to be known as the State of Israel, " which would start to function from the termination of the mandate.

The borders of the new state were not specified in the declaration. Neighboring Arab armies invaded the former Palestinian mandate on the next day and fought the Israeli forces. It extended its laws to the Golan Heights and East Jerusalem , but not the West Bank.

Efforts to resolve the Israeli-Palestinian conflict have not resulted in peace. However, peace treaties between Israel and both Egypt and Jordan have successfully been signed. Israel's occupation of Gaza, the West Bank and East Jerusalem is the world's longest military occupation in modern times. The population of Israel , as defined by the Israel Central Bureau of Statistics , was estimated in 2016 to be 8,476,600 people.

It is the world's only Jewish-majority state , with 6,345,400 citizens, or 74.9%, being designated as Jewish. The country's second largest group of citizens are denoted as Arabs , numbering 1,760,400 people (including the Druze and most East Jerusalem Arabs). The great majority of Israeli Arabs are Sunni Muslims , with smaller but significant numbers of semi-settled Negev Bedouins ; the rest are Christians and Druze. Other far smaller minorities include Maronites , Samaritans , Dom people and Roma , Black Hebrew Israelites , other Sub-Saharan Africans , Armenians , Circassians , Vietnamese boat people , and others.

Israel also hosts a significant population of non-citizen foreign workers and asylum seekers from Africa and Asia. In its Basic Laws , Israel defines itself as a Jewish and democratic state.

Israel is a representative democracy with a parliamentary system, proportional representation and universal suffrage. The prime minister serves as head of government and the Knesset serves as the legislature. Israel is a developed country and an OECD member, with the 35th-largest economy in the world by nominal gross domestic product as of 2015. The country benefits from a highly skilled workforce and is among the most educated countries in the world with the one of the highest percentage of its citizens holding a tertiary education degree.

The country has the highest standard of living in the Middle East and the fourth highest in Asia , and has one of the highest life expectancies in the world. World-renowned expert numismatist, enthusiast, author and dealer in authentic ancient Greek, ancient Roman, ancient Byzantine, world coins & more. Ilya Zlobin is an independent individual who has a passion for coin collecting, research and understanding the importance of the historical context and significance all coins and objects represent.

Additionally, the coin is inside it's own protective coin flip (holder), with a 2x2 inch description of the coin matching the individual number on the COA. Whether your goal is to collect or give the item as a gift, coins presented like this could be more prized and valued higher than items that were not given such care and attention to. When should I leave feedback? Please don't leave any negative feedbacks, as it happens sometimes that people rush to leave feedback before letting sufficient time for their order to arrive. The matter of fact is that any issues can be resolved, as reputation is most important to me. My goal is to provide superior products and quality of service. How and where do I learn more about collecting ancient coins?

Visit the Guide on How to Use My Store. For on an overview about using my store, with additional information and links to all other parts of my store which may include educational information on topics you are looking for.