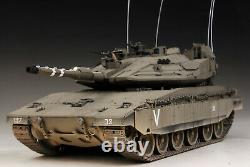 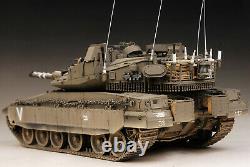 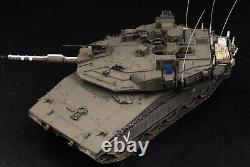 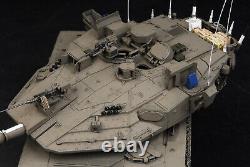 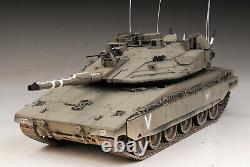 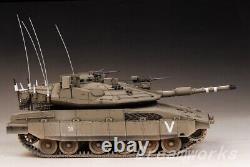 Top building quality with over 950 parts of great details overall. Add on many boxes and more fancy accessories. Best detailed Merkava IV kit in the market.

Applique armor features recessed lines and lovely raised details including bolt heads, tie-downs, and latches. The upper hull with a lot of the detail integrated.

The turret is with busy vehicle equipment details. Add on Trophy Windbreaker Active Protection System with great details. The barrel is a multi-part and looks very good. 50 cal and the loader's MAG machine gun are very well done.

Impressive ball and chain armour hanging from the rear of the turret. The lower hull with suspension arms, return rollers, spring details. The rear hull storage racks are fair detail wise Boat hull ventral armor plate covers motorization holes in the lower hull. The rear panel has the access clamshell doors as separate parts and can be displayed open or closed. Suspension with the nicely detailed springs presented. The detail on the track links is very good. Side skirts with great details. Adding metal towing cable, on vehicle tools and many accessories. Buffing and polishing to remove mold seam. Base color with primer and putty for better surface detail. Airbrushed and painted with multicolor. Adding clear paint for good finishing on decal applying. Washing to enhance the surface detail increase the appearance of depth including panels, doors, hatches, rivets, bolt head, and more. Dry brushing to emphasize and highlight texture with edge for good wear, tear and fading. Multi-color filters for blend color effects. Adding nonglossy paint for better finishing. The great detail paint job on rust and paint chips off with scratches, worn and bare metal realistic simulating, flow rust and rain streaks effects, grease with staining appearing, engine smoking and muffler burned representing. Also smear and dirt with dust and real mud and more on real-life weathering. Final protective layer for long-term collection. 7th Armored Brigade (Israel) The 7th Armored Brigade Hebrew:????? Hativa Sheva is a military formation of the Israel Defense Forces (IDF). Formed during the 1948 Arab-Israeli War and in operation ever since, it is the oldest armored brigade in the IDF. The brigade took part in all of Israel`s wars.

During the Battles of Latrun in 1948, the 3rd Alexandroni and 7th Brigades together suffered 139 casualties. It fought in the Six-Day War under the command of Colonel Shmuel Gonen (Gorodish). In the Yom Kippur War, under the command of Colonel Avigdor Ben-Gal, it was stationed at the defense line of the northern part of the Golan Heights (sharing the defense with the Barak Armored Brigade), where it successfully repulsed heavy attacks by much larger Syrian forces. During the 1948 War, the 7th Brigade primarily consisted of Sherman tanks and mounted infantry. Early on, the 7th also contained an artillery element.

During the 1960s, the brigade was equipped with British Centurion tanks modified in Israel. These were gradually superseded in the late 1970s by the Israeli-made Merkava main battle tanks, of which several versions have since been employed. The 7th Brigade once belonged to Israel`s Southern Command. The 7th was based in the Golan Heights as part of the 36th Armored Division from the end of the Yom Kippur War until February 2014. The Syrians were effectively decimated, although they had amassed thousands of Soviet-designed T-55 tanks, thousands of field artillery, and thousands of troops.

Merkava WindbreakerWindbreaker latest generation of Israeli-made Merkava IV with Rafael Trophy APS (Active Protection System) nicknamed Merkava Mark IVM Windbreaker, is one of the most protected Main Battle Tank (MBT) in the world. This item is in the category "Toys & Hobbies\Models & Kits\Other Models & Kits". The seller is "dreamworkshobby" and is located in this country: CA. This item can be shipped worldwide.