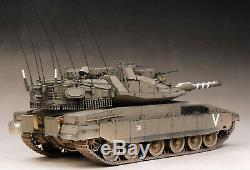 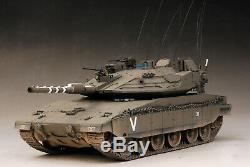 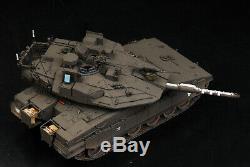 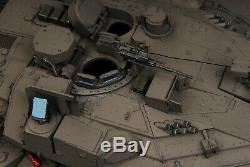 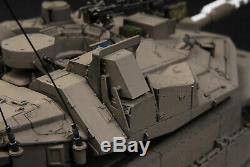 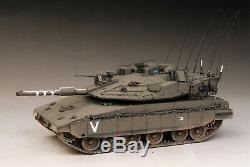 Reproducttion of ERA armour on upper turret and front body. Turret, basket and side skirt from new tooling.

Applique armour features recessed lines and lovely raised details including bolt heads, tie-downs and latches. The upper hull with a lot of the detail integrated. The turret with busy on vehicle equippment details. Add on Trophy Windbreaker Active Protection System with great details. The barrel is a multi-part and looks very good.

50 cal and the loaders MAG machine gun are very well done. Impressived ball and chain armour hanging from the rear of the turret.

The rear panel has the access clamshell doors as separate parts and can be displayed open or closed. Suspension with the nicely detailed springs presented. The detail on the track links is very good. Side skirts with great details. Add metal towing cable, antenna, on vehicle tools and many accessories. Buffing and polishing to remove mold seam. Base color with primer and putty for better surface detail. Airbrushed and painted with multicolor. Add clear paint for good finishing on decal applying. Washing to enhance the surface detail increase the appearance of depth including panels, doors, hatches, rivets, bolt head and more. Dry brushing to emphasis and highlighting texture with edge for good wear, tear and fading. Multi-color filters for blend color effects. Add non glossy paint for better finishing. Great detail paint job on rust and paint chips off with scratches, worn and bare metal realistic simulating, flow rust and rain streaks effects, grease with staining appearing, engine smoking and muffler burned representing. Also smear and dirt with dust and real mud and more on real life weathering. Final protective layer for long term collection. 4 Meil Ruach (wind coat or windbreaker) is an improved version of the Merkava Mk. 4 tank, equipped with Trophy Active Protection System (APS). Sometimes this tank is referred as the Merkava Mk.

4 Baz, or Merkava Mk. The main goal was to improve protection of the Merkava Mk. 4 tanks against advanced anti-tank guided missiles, fitted with tandem HEAT warheads. Production of this tank began in 2009.

The first brigade equipped with these improved Merkava Mk. 4 tanks was declared operational in 2011. In 2014 it has been reported, that Israel will export a number of Merkava Mk. 4 tanks to an undisclosed customer, possibly Columbia. However it is unknown whether these will be fitted with Trophy active protection system. 4 Meil Ruach is one of the best main battle tanks in the world. The Trophy is an Israeli-developed hard-kill protection system for armored vehicles. It detects and intercepts incoming anti-tank rockets and anti-tank guided missiles by firing a shotgun-like blast within a few meters of the tank. The Trophy destroys incoming rockets and missiles before these have a chance of hitting the tank.

Furthermore the Trophy system reportedly identifies the firing location and allows to engage anti-tank teams. Even though the original Merkava Mk. 4 was one of the most protected tanks in the world already, the improved Mk. 4 Meil Ruach with Trophy APS is even more survivable. The first operational success was in 2011, when the Merkava Mk.

4 Meil Ruach tank successfully survived a missile attack. Since then these tanks intercepted dozens of anti-tank rockets, including RPG-29 and anti-tank guided missiles, including Kornet and Metis-M. Protection suite also includes advanced threat identification and warning system, as well as countermeasures system. 4 Meil Ruach has laser warning receiver and smoke grenade dischargers. When the tank is illuminated by laser it launches smoke screen. This system reduces the chance of being hit by laser-guided anti-tank missiles with semi-automatic guidance. 4 Meil Ruach is fitted with modular armor, that can be reconfigured to match specific threats. Bottom of the hull is strengthened for improved protection against land mines. This tank is well protected against air-launched guided missiles and top attack anti-tank weapons. 4 Meil Ruach is fitted with a 120 mm smoothbore gun, developed by Israel Military Industries (IMI). It can fire various 120 mm munitions, including all standard NATO munitions.

Furthermore it can launch LAHAT anti-tank guided missiles in the same manner as ordinary projectiles. Ten rounds are stored in electrically-operated revolving magazine and are ready to fire at any time. Every single round is stored in a protective container, to protect the crew in case the ammunition explosion. Loader selects the ammunition type semi-automatically. This main battle tank is equipped with advanced fire control system.

One of the advanced features is a high first round hit probability when firing against helicopters with conventional munitions. Secondary armament includes coaxial 12.7 mm and 7.62 mm machine guns. There is another 7.62 mm machine gun, mounted on top of the roof. 4 Meil Ruach is fitted with internally-operated 60 mm mortar. This main battle tank has an integrated battle management system. It enables crew to plan missions, navigate and update their situation awareness. It also reports friendly units and enemy targets. This battle management system combines friendly tanks, anti-tank and artillery units and helicopters in a combined task force.

In 2017 it was planned that Israel Defense Forces (IDF) will begin trials of Elbit`s Iron Vision system. It is the world`s first helmet-mounted head-up display for tanks. The system uses a number of externally-mounted cameras to project 360° view of a tank`s surroundings onto the helmet-mounted display of its crew members. So the crew no longer have to open hatches for observation.

Previously Elbit developed a similar system for the F-35 fighter aircraft. 4 has a crew of four, including commander, gunner, loader and driver.

Furthermore, if required, the tank can accommodate additional dismounts. Unique layout of Merkava series main battle tanks with front-moutned engines allowed to free space for the troops or cargo at the rear of the hull. When ammunition is unloaded the tank can carry up to 8 dismounts or 3 stretchers. Troops enter and leave the vehicle threw the rear hatch.

This unique capability allows to deliver troops directly to the battlefield, or evacuate them. This tank offers much higher level of protection for the dismounts than infantry fighting vehicles, that are typically used for this role. Furthermore a front-mounted engine provided improved frontal protection.

This main battle tank is powered by General Dynamics 883 V-12 diesel engine, developing 1 500 horsepower. This engine was originally developed by a German MTU company, but it is license-produced by General Dynamics Land Systems in the USA. The same engine is used on the French Leclerc main battle tank. Engine pack and transmission are located at the front of the hull. This whole powerpack can be replaced in field conditions within 30 minutes. Mine rollers can be fitted at the front of the hull. The item "Award Winner Built 1/35 IDF Merkava Mk.

M Meil Ruach+Trophy APS+PE" is in sale since Friday, March 15, 2019. This item is in the category "Toys & Hobbies\Models & Kits\Military\Armor".