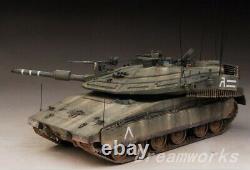 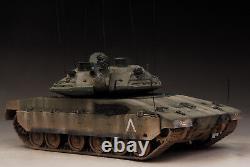 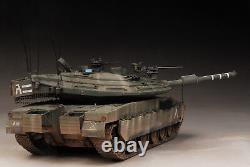 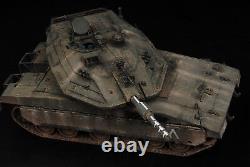 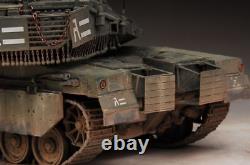 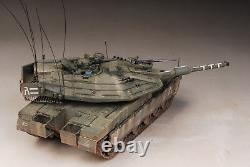 IDF color scheme with accurate unit markings. Top building quality with outstanding details throughout whole model and very high standard accuracy on every individual part. Brass photo-etched parts add on. Full of detail and the add on armor block on turret and hull. Detailed tracks with road wheel detail. Rotating turret and gun elevation. Adding on vehicle tools and more add on details. The detailing is right up to excellent standards. Captured the structures of the applique armor around the front and sides of the photo-etch "Dingle Balls" metal chain armor.

PE brass engine and deck grills, brass mount and clasps and more. Other etched brass includes the vehicle serial number plates as well as end plates for the hull stowage bins, the floor of the bustle basket and more.

Tracks with road wheel detail. The detail on the flexible tracks is very good. Towing cable, lights, antenna, on vehicle tools and many exerior details.

Metal chain, antenna, and more add on accessories. Buffing and polishing to remove mold seam. Base color with primer and putty for better surface detail. Airbrushed and painted with multicolor. Adding clear paint for good finishing on decal applying.

Also smear and dirt with dust and real mud and more on real life weathering. Final protective layer for long term collection. Development of the Merkava Mk 4 commenced in the early 1990s and its existence was first revealed in 2002. First production Merkava Mk 4 MBTs have been delivered to the Israel Defence Force (IDF) and the first battalion was fully operational in 2004.

The Merkava Mk 4 will start to replace the older US supplied upgraded General Dynamics Land Systems M60A1 series MBTs. The first battalion of Merkava Mk 4 tanks entered service with the Israel Defence Forces in 2004. The tank is capable of carrying eight infantry soldiers, a command group or three litter patients (stretcher casualties) in addition to the tank crew of commander, loader, gunner and driver.

The tank is capable of firing on the move at moving targets and has demonstrated high hit probability in firing against attack helicopters using conventional anti-tank munitions. The Merkava is equipped with a turret 12.7 mm caliber coaxial machine gun which enables the crew to lay down fairly heavy cover fire without the use of the main gun, which is relatively ineffective against individual enemy combatants. The most sensitive areas of a tank, its optics, exhaust ports and ventilators, are all protected by a newly-developed high-strength metal mesh. Rubber whip pole-markers with LED tips and a driver's rear-facing camera have been installed to improve navigation and maneuverability in an urban environment by day or by night.

Propulsion: The Merkava 4 is powered by a V-12 diesel engine rated at 1,500hp. The engine compartment and one fuel tank are at the front of the tank and two fuel tanks are at the back. The new engine represents a 25% increase in power compared to the 1,200hp powerpack installed on the Merkava 3. This item is in the category "Toys & Hobbies\Models & Kits\Other Models & Kits". The seller is "dreamworkshobby" and is located in this country: CA. This item can be shipped to North, South, or Latin America, all countries in Europe, all countries in continental Asia, Australia.