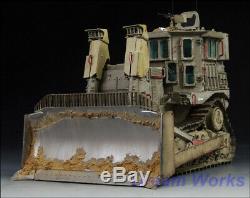 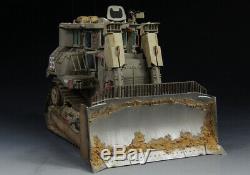 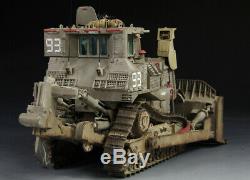 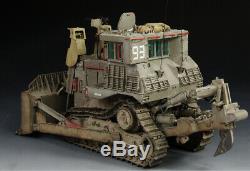 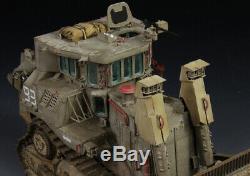 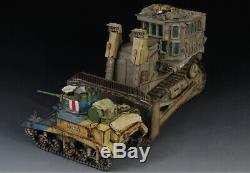 Impressived large dozer blade has sliding rams details. The detailed curved shovel blade is backup by side-plates, push-rods and a webwork of strengthening plates and more. The well detailed large floodlights on top of rams with protecting cage.

The complex and robust ripper, a large hydraulically operated tooth with surprisingly large number of parts. The big spade with great details.

Arm, controls and hydraulic pistons and pipes with great details. Engine compartment with lots of moulded in louvre detail.

The detailed front lights, fire extinguisher, grab rails and the large flip-topped exhaust added to engine compartment. The cab is well detailed inside and out including instrument panel.

The cab`s armoured side panels with great details. Additional exterior details including fairing and stowage boxes, as well as grilles, windows and the lip. The driver`s door is hinged with clear parts and display the seats and controls inside.

Realistic tinted blue bullet-proof glass installed for windows. The glazing is sandwiched between The outer skin and an inner window frame.

Additional opener detail is added where appropriate. The access panels for maintenance and replacement of the glass with hinge and latch detail.

Opening hatch for the commander/gunner with details both side. The detailed rear light cluster with small cage. The vehicle`s serial number is attached to the rear of the cab on a plaque and repeated on the sides of the machine. Two antenna bases on the rear with the sprung bases included.

Additional fuel cans in a tube-framed rack are added to the side of the cab. Flexible "rubber" hydraulic hose details are shown in three diagrams at different angles. The 16 roadwheels are sandwiched between the two halves of an armoured sponson with great detail.

The idler wheels and drive sprocket plus a poly-cap with detail. Individual link tracks with great tooth detail. The roof self-defence machine gun onto its pintle mount with ammo. Add on 2 antenna, jerrycan, tools and more accessories. Buffing and polishing to remove mold seam.

Base color with primer and putty for better surface detail. Airbrushed and painted with multicolor. Add clear paint for good finishing on decal applying.

The Combat Engineering Corps mottos are "Always First" (Rishonim Tamid) and the unofficial "The hard, we shall do today; the impossible, we shall do tomorrow". Its roles include mobility assurance, road breaching, defense and fortifications, counter-mobility of enemy forces, construction and destruction under fire, sabotage, explosives, bomb disposal, counter-weapons of mass destruction (NBC) and special engineering missions. In addition to Combat Engineering Corps sappers, each infantry brigade has an engineering company trained with basic engineering and explosive ordnance disposal (EOD) skills (called). Combat Engineering Corps sappers and heavy equipment operators are often attached to other units (such as armored or infantry brigades) in order to help them breach through obstacles and handle explosive threats.

D9R Dozer Based upon the successful Caterpillar D9 bulldozer chassis, the D9R is the latest incarnation of the armoured variant used extensively in the Israeli Defence Force (IDF) in the Combat Engineering Corps. It is heavily armoured with bullet-proof glazing, as well as protection for the hydraulic and electrical components, with some units sporting the new slat armour to pre-detonate RPG rounds before reaching the cab area, a feature that was introduced in 2005. It has a crew of two, with the commander issuing the orders and manning the roof mounted M2 machine gun, and a driver living up to his job title. Its nickname in IDF service is Doobie, which is Hebrew for Teddy Bear, although it`s a bit of a tough looking teddy bear for my liking! It is used for breaching barriers under fire, as well as creating or destroying earthworks, or making areas passable by heavier armour.

They have also been used to clear landmines, make fortifications and clear areas of cover, preventing sneak attacks on their forces. They are so well armoured as to be impervious to all but the largest of explosives, and have been known to withstand direct hits from RPGs and IEDs up to half a tonne.

The item "Award Winner Built Meng 1/35 IDF Caterpillar D9R Armoured Bulldozer +PE+Inter" is in sale since Monday, June 20, 2016. This item is in the category "Toys & Hobbies\Models & Kits\Military\Armor". The seller is "dreamworkshobby" and is located in Scarborough, Ontario.