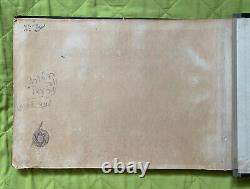 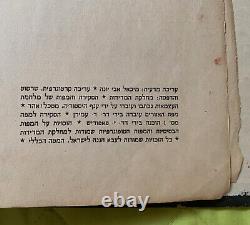 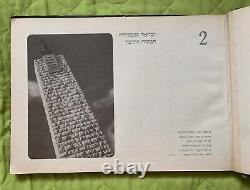 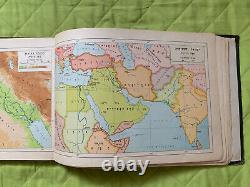 Geographical and Historical Atlas of the Land of Israel. That was edited by Michael Avi Yona and published by the Israel Defense Forces (IDF) in the 1950's. On a first inner page. The first boy that was born in the Jewish Afula est. AFULA - a city in the Northern District of Israel, often known as the "Capital of the Valley" due to its strategic location in the Jezreel Valley.

During his career he was a Professor of Archaeology at the Hebrew University of Jerusalem and served as secretary of Israel's Department of Antiquities. Born in Lemberg, Austria-Hungary (today Lviv, Ukraine), Avi-Yonah moved to the Land of Israel with his parents in 1919 during the Third Aliyah. He first studied at Gymnasia Rehavia in Jerusalem, then he went to England and studied history and archeology at the University of London. Upon his return to the Land of Israel, he studied at the British School of Archaeology in Jerusalem.

His first archaeological excavations were at Tel el-Ajjul near Gaza, and the Jerusalem Ophel. At the end of his studies, he joined the Department of Antiquities of the British government of Palestine. He worked as a librarian and archivist.

After the independence of the state of Israel, he became secretary of the Department of Antiquities. In 1949, he conducted excavations at Givat Ram in Jerusalem during the construction of the International Convention Center, where he was the first to discover a brick factory of the Legio X Fretensis. He participated in the first survey that preceded the Masada excavations, and conducted a limited excavation north of Caesarea Maritima where he discovered an ancient synagogue. He was awarded the Bialik Prize in 1955 for his book Antiquities of our land. Avi-Yonah died in Jerusalem in 1974. The IDF General Staff Publishing Div. Book dimensions: 35 x 23.5 x 2 cm /. This Atlas is pre-owned, still in good condition, pages are not so clean - pages are yellowish or have yellowish dots and this due to aging, there are small stains on some pages (finger prints); medium wear on the cover like few light scratches, scuffs and folds on the corners; also, it has a pencil marks in Hebrew (previous owners) on a first inner page.

If you are in doubt please check my feedback. I will answer all questions as best I can. When your parcel arrives and you are satisfied please leave a feedback so that I know it arrived and all is well, if for some reason you are not satisfied please contact me directly and we can work through any problem. To the people there I apologize. My outlook on life is that there are good people and bad people no matter what country, what color, what religion or how tall or how short they may be.

And that being nice is underrated. Check my other listings in my store.

This item is in the category "Collectibles\Religion & Spirituality\Judaism\Books". The seller is "michaelcoins2012" and is located in this country: IL. This item can be shipped worldwide.