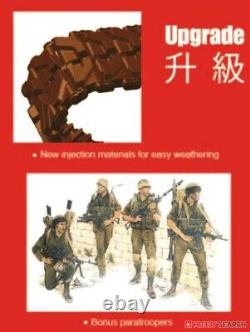 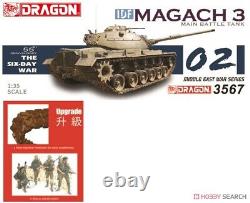 This is a pre-order item! Pre-order items are often delayed even more. Release delays and cancellations tend to be prolonged. Release date (and if postponed) can you wait patiently? Stocks are expected to run out even during the reservation period.

Israeli Defense Force IDF Magach 1&2 2in1 Airborne soldier figure included. Making Israel's elite [About the actual vehicle] Magach is the main battle tank of the Israeli Defense Force, which has a name that means "strike" in Hebrew. Various types were developed from Magach 1 depending on the vehicle that was based on Israel's own modified vehicle based on the American M48 Patton and M60 tank. Israel initially deployed a vehicle with improvements based on the American M4 Sherman tank.

In the 1950s, the M60 Super Sherman was developed, but in order to compete with the Soviet-made T-54 and T-55 tanks equipped by Arab countries, we are developing a tank based on the more powerful M48 Patton. Vehicles that have been improved and refurbished unique to Israel have been given the name Magafu.

Magafu has been updated every time it experiences actual fighting in the Middle East war, and a type based on the M60 has also appeared. For a long time, it continued to be active as the main battle tank of the Israel Defense Forces. In June 1967, the 3rd Middle East War broke out between Israel and Arab countries such as Egypt, and Israel won in just 6 days.

Prepare special parts for the fender, engine deck, main gun muzzle brake, etc. To reproduce the characteristics of the Magafu. Of course, the body with realistic casting skin, the shape of the turret is also accurately modeled, and the finish is full of weight. In addition, the suspension arm is a separate part with a sufficient three-dimensional effect, and the easy-to-assemble belt-type track adopts a new material that is easy to paint. In addition, the kit also includes figures of Israeli elite troops and paratrooper soldiers.

It is a kit that expands the image of making a scene. Reproduce Israel's Magach at 1/35. Can be assembled by selecting either Magafu 1 or Magafu 2. The track is a belt type that uses a material that is easy to paint. As a bonus, 4 figures of Israeli paratrooper soldiers are also set. Israeli Defense Force IDF Magach 3 Israeli Airborne Troops soldier figure included. Magaf is the main battle tank of the Israeli Defense Force, which has a name that means "strike" in Hebrew. Among them, Magafu 3 appeared in 1968. Based on the American M48A1/A2C/A3 types, the main feature is that the main gun is equipped with a British 51 caliber L7/105mm rifle instead of a 90mm gun. Also, the cupola has been changed to a cupola made by Urdan, which features a low profile. In addition, the engine was also dried to the Continental AVDS-1790-2AV type 12-cylinder air-cooled diesel engine. It is said that about 800 Magach 3 were deployed during the Yom Kippur War that broke out in 1973, and continued to be active as the main battle tank of the Israel Defense Forces against the Egyptian and Syrian forces that launched a surprise attack and went on the offensive. Magaf 3 of the Israeli Defense Force released by Dragon as a lineup of the 6-day war series in the Middle East. At the 55th anniversary of this battle, called the 6-Day War, which broke out in June 1967 and was won by Israel in just 6 days, pay attention to the model that focuses on the Middle East War. The details of Magafu 3 are firmly reproduced on a 1/35 scale. Above all, the main gun models a 105mm tank gun. The mantlet with a weatherproof cover at the base uses DS material for the cover parts to enhance the reality of the finish.

Cast turrets with subtle shapes are also accurately reproduced. The expression of the casting skin is also full of realism. In addition, the casting number embossed on the turret is also reproduced.

In addition to the shape of the car body, details such as the engine deck and the slit at the rear of the car body are also delicately expressed, and the paint finish is also good enough. In addition, the suspension arm is a separate part with a sufficient three-dimensional effect, and the belt-type crawler belt uses a material that is easy to paint. Reality is further improved by weathering etc. In addition, this kit also includes figures of Israeli paratroopers.

The combination with Magach expresses the strength of the Israeli army elite. It is a kit that you can enjoy the spread of the scene scene. Reproduce Israel's Magach 3 at 1/35. The track is a belt type. Uses materials that are easy to paint. 4 figures of Israeli paratrooper soldiers are also set as a bonus. Please be sure that you are willing to wait the necessary time. You will be notified if your order has a change in release date. In some unlikely events i. US, Canada, Mexico, Europe, Russian Federation, Middle East, Oceania, Asia..

US, Canada, Mexico, Europe, Russian Federation, Middle East, Oceania, Asia It takes 1-2 weeks. All items are Brand New and unopened in their original boxes unless otherwise stated. Product images are for illustration purposes only and actual items may vary. If you received a faulty or damaged item, please contact me immediately with a picture of the damage part.

If you received the wrong item, please send the item back in it's original condition. And I will send you the correct one immediately all on my expense at my discretion. Return is not accepted if the damage is limited to the outer box of the product. Any claim of dissatisfaction should be made immediately upon receipt of item.

Please do not hesitate to message me if you have any queries, I'm more than happy to clear your queries. Thank you for your patronage in advance! This item is in the category "Toys & Hobbies\Action Figures & Accessories\Mixed Lots". The seller is "spcy2515" and is located in this country: JP. This item can be shipped worldwide.